Quite possibly the first bat pony OC to be created after their debut in Luna Eclipsed, Midnight Blossom was also the first female bat pony OC to be well-known. She was created long before the bat threads on /mlp/ by Equestria-Prevails on February 28, 2012. Other ponies created before the Bat Threads are Night Watch, Florence, Jasmine, and Gloom Wing.

Not much is known about her, but she is often portrayed as being part of Luna's Night Guard. She is in a 'relationship' with Cloud Skipper. 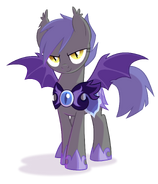 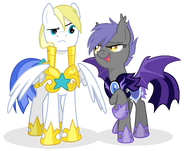