She is a very kind and gentle mare, and is extremely protective of her loved ones. Her personality can best be summed up as silly, oblivious, and reserved. She is especially shy around new ponies that she has no connecting relationships with. The only exception to that is Sirocca, whom she attaches to almost immediately during their first meeting.

Speck also has a very broad taste in hats, and is appreciative of high fashion and fine dining. Similarly to Echo, Speck has a great love of food, specifically pineapples, bananas, and any treat-based form of those two fruits. Unlike Echo, Speck's diet solely consists of fruit, and is overall similar to that of a non-batpony.

Outside of her AFO-Canon, she is still shown to be Sirocca's adoptive mother. While she does not have a job in AFO, she has been shown to be a babysitter in the Merry Moon Memorial story. Contrary to their sleeping habits in AFO, Speck and Sirocca are both nocturnal otherwise. 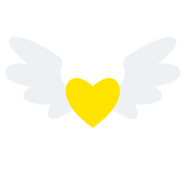 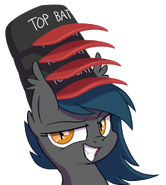 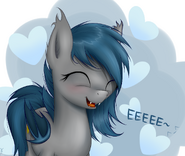 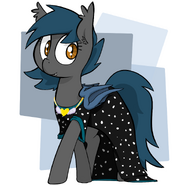